The patent at issue in Visual Memory was U.S. Patent No. 5,953,740 (“740 Patent”).  Independent claim 1 was the claim at issue and examined by the district court and the Federal Circuit.  Claim 1 of the 740 patent states the following: 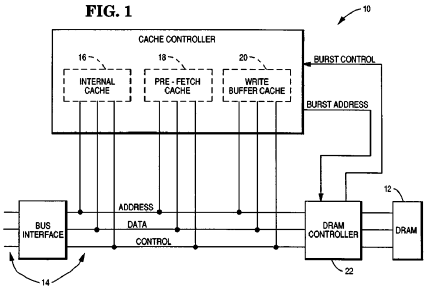 The software claimed by the 740 Patent includes three caches.  The three caches possess programmable operations characteristics that are programmable based on the type of processor connected to the memory system.  By separating the functionality for the different caches and defining those functions based on the type of processor, the system of the 740 Patent can “achieve or exceed the performance of a system utilizing a cache many times larger than the cumulative size of the subject caches.”

The Court began the patentable subject matter analysis with step one of the Alice two-step analysis.  The Court noted that while the two steps in the Alice framework “involve overlapping scrutiny of the content of the claims,” the “Supreme Court’s formulation makes clear that the first-stage filter is a meaningful one, sometimes ending the § 101 inquiry.”  The Court stated that two recent cases, Enfish, LLC v. Microsoft Corp., 822 F.3d 1327 (Fed. Cir. 2016) and Thales Visionix Inc. v. United States, 850 F.3d 1343 (Fed. Cir. 2017), informed their evaluation of if the claims of the 740 Patent are directed to patentable subject matter.

The technology at issue in Visual Memory is yet another example of patent eligible software.  The § 101 landscape related for software inventions continues to develop post-Alice and will continue to come into focus as decisions are issued.  Software is critical in creating new and innovative improvements over existing technology and patent protection remains an integral component in protecting the resources spent developing software. To learn more about the author of this article, Derek Fahey, click HERE.

Please go to the Instagram Feed settings page to create a feed.